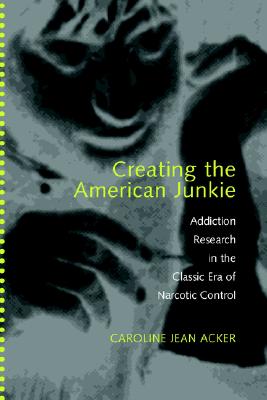 CREATING THE AMERICAN JUNKIE : ADDICTION RESEARCH IN THE CLASSIC ERA OF NARCOTIC CONTROL

Heroin was only one drug among many that worried Progressive Era anti-vice reformers, but by the mid-twentieth century, heroin addiction came to symbolize irredeemable deviance. "Creating the American Junkie" examines how psychiatristsand psychologists produced a construction of opiate addicts as deviants with inherently flawed personalities caught in the grip of a dependency from which few would ever escape. Their portrayal of the tough urban addict helped bolster the federal government's policy of drug prohibition and created a social context that made the life of the American heroin addict, or junkie, more, not less, precarious in the wake of Progressive Era reforms.

Weaving together the accounts of addicts and researchers, Acker examines how the construction of addiction in the early twentieth century was strongly influenced by the professional concerns of psychiatrists seeking to increase their medical authority; by the disciplinary ambitions of pharmacologists to build a drug development infrastructure; and by the American Medical Association's campaign to reduce prescriptions of opiates and to absolve physicians in private practice from the necessity of treating difficult addicts as patients. In contrast, early sociological studies of heroin addicts formed a basis for criticizing the criminalization of addiction. By 1940, Acker concludes, a particular configuration of ideas about opiate addiction was firmly in place and remained essentially stable until the enormous demographic changes in drug use of the 1960s and 1970s prompted changes in the understanding of addiction--and in public policy.

CREATING THE AMERICAN JUNKIE : ADDICTION RESEARCH IN THE CLASSIC ERA OF NARCOTIC CONTROL