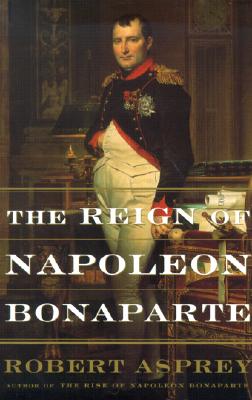 In The Reign of Napoleon Bonaparte, the second and final volume of Robert Asprey's cradle-to-grave biography, the author expands upon the encompassing portrayal of Napoleon-child, man, general, lover, husband, king, emperor, father, conqueror, statesman, and, finally, prisoner-that he developed in volume one. Asprey gives us more of the personality and passion that marks this swift-moving, intensely dramatic saga.In The Rise of Napoleon Bonaparte, Asprey showed us that Napoleon was not the father of chaos but rather an heir to chaos. In this sequel, we see Napoleon struggling to deal with that chaos. We peer over Napoleon's shoulder as he solidifies his growing empire through a series of dynastic marriages, military victories, and shrewd diplomatic manipulations. We watch Napoleon lose control of his empire, plot his return from Elba, rally peasants in his march on Paris, and endure defeat at Waterloo and exile to St. Helena. The concluding installment to this exciting, reckless thrill ride shows Napoleon as he was-not saint, not sinner, but a man dedicated to and ultimately devoured by his vision of himself, his empire, and his world.