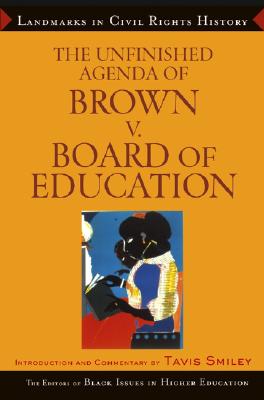 UNFINISHED AGENDA OF BROWN V. BOARD OF EDUCATION LANDMARKS IN CIVIL RIGHTS HISTORY

Praise for The Unfinished Agenda of Brown V. Board of Education
"My father, Oliver L. Brown, for whom Brown v. Board of Education is named, was a proud member of a group of a few hundred people, across the country, who took risks by taking a stand for what they believed. He died in 1961, just seven years after the case, so he didn't live long enough to know that Brown would become the foundation on which so much of this country's civil and human rights initiatives would rest.
Brown v. Board became important for every citizen, not just African Americans. It shows that the founding documents of our country provided us with sovereign rights that cannot be restricted by state and local governments. That decision impacted the lives of women, persons with disabilities, blacks, whites, Hispanics, Asians, and everyone living in this country.
Brown was significant in attacking the silence. It opened up a dialogue and forced the country to take on greater responsibility; we at every level had to start addressing the issue of race. In many ways, once the dialogue started, we finally began to under stand the depths of racism. This case was about gaining access to educational resources; the resources were and remain where the white children are. The Unfinished Agenda of Brown v. Board of Education is about renewing and continuing the promise of Brown."
-Cheryl Brown Henderson, president of the Brown Foundation for Educational Equity, Excellence, and Research, and daughter of Oliver L. Brown, one of the thirteen plaintiffs in Brown v. Board of Education

UNFINISHED AGENDA OF BROWN V. BOARD OF EDUCATION LANDMARKS IN CIVIL RIGHTS HISTORY