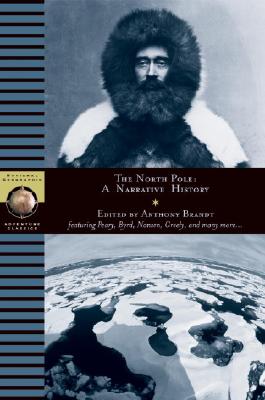 NORTH POLE, THE A NARRATIVE HISTORY

"A few toes aren't much to give to achieve the Pole," observed Robert Peary, but as Anthony Brandt's gripping new anthology shows, much more was at risk for the men who tested the limits of endurance to reach the top of the world.

Drawing on the extensive archives of the National Geographic Society, The North Pole tells the story of race to the Pole through the memoirs, letters, ship's logs, and diary entries of the great Arctic explorers. Beginning with the disappearance of Sir John Franklin in 1845, The North Pole documents the international efforts made to find the true Northernmost point of the globe. Anthony Brandt weaves together vivid accounts of the disasters that ensued. The explorers included men like Elisha Kane, a sickly man and useless commander, who led his team close to death in 1854, and Charles Hall, a printer from Ohio who made the mistake of taking an experienced crew who refused to commit suicide for him. Their mutiny so enraged Hall that he died of a stroke, and some of his crew escaped south on an ice-floe. Later explorers included daring Norwegians on skis, expeditions organized by the American tabloid press, Swedish balloonists, aristocratic Italians and finally the obsessive Robert Peary, who on one trip took his pregnant wife with him in order to set a record for the most northerly birth in history. Peary finally achieved the pole in 1909.

In addition to Peary's triumphant account of his achievement, The North Pole includes the tale of a fourteen-year-old Horatio Nelson battling polar bears, the sinking of the Jeannette on De Long's push farthest north, Fridtjof Nansen's astonishing survival for two years in the Arctic, and the ill-fated dirigibleexpedition of the Italia. These stories and others are told in the explorers' own words, in all their direct and moving plainness, as they endure extremes of physical hardship and contend with each other in grim competition to reach the Pole first. Noted adventure expert Anthony Brandt compiles and blends together the narratives of the famous-and infamous- explorers into one unfolding historical drama that features the very best accounts of an enthralling story that spans four hundred years and embraces many different motives, modes of travel, and remarkable men -all risking their lives for a geographic point 500 miles from the nearest land.

Anthony Brandt deftly weaves together intriguing journal excerpts and fascinating expedition details to form an unforgettable impression of both the characters involved and the hardships they faced. And the hardships here are gruesome. Scarcely one of the many glory seekers from Britain, the U.S., Germany, Russia, Italy and elsewhere return from their quests wholly intact, either physically or mentally. They ate their dogs, they ate moss and, sometimes, they ate each other, but even when it became clear that nothing but a wasteland awaited them at the pole, they pressed on. Stories like this make for a captivating look at the best and worst possibilities of the human spirit, woven together by an author who has established himself as one of the best adventure writers today.

Explorers accounts featured in this book include:

NORTH POLE, THE A NARRATIVE HISTORY