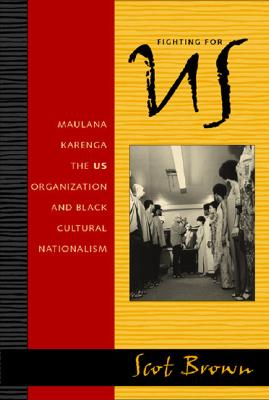 FIGHTING FOR US MAULANA KARENGA, THE US ORGANIZATION, AND BLACK CULTURAL NATIONALISM

In spite of the ever-growing popularity of Kwanzaa, the story of the influential Black nationalist organization behind the holiday has never been told. Fighting for Us explores the fascinating history of the US Organization, a Black nationalist group based in California that played a leading role in Black Power politics and culture during the late 1960s and early '70s whose influence is still felt today. Advocates of Afrocentric renewal, US unleashed creative and intellectual passions that continue to fuel debate and controversy among scholars and students of the Black Power movement.

Founded in 1965 by Maulana Karenga, US established an extensive network of alliances with a diverse body of activists, artists and organizations throughout the United States for the purpose of bringing about an African American cultural revolution. Fighting for US presents the first historical examination of US' philosophy, internal dynamics, political activism and influence on African American art, making an elaborate use of oral history interviews, organizational archives, Federal Bureau of Investigation files, newspaper accounts, and other primary sources of the period.

This book also sheds light on factors contributing to the organization's decline in the early '70s--;government repression, authoritarianism, sexism, and elitist vanguard politics. Previous scholarship about US has been shaped by a war of words associated with a feud between US and the Black Panther Party that gave way to a series of violent and deadly clashes in Los Angeles. Venturing beyond the lingering rhetoric of rivalry, this book illuminates the ideological similarities and differences between US's "cultural" nationalism and the Black Panther Party's "revolutionary" nationalism. Today, US's emphasis on culture has endured as evidenced by the popularity of Kwanzaa and the Afrocentrism in Black art and popular media. Engaging and original, Fighting for US will be the definitive work on Maulana Karenga, the US organization, and Black cultural nationalism in America.

Title: FIGHTING FOR US MAULANA KARENGA, THE US ORGANIZATION, AND BLACK CULTURAL NATIONALISM

FIGHTING FOR US MAULANA KARENGA, THE US ORGANIZATION, AND BLACK CULTURAL NATIONALISM