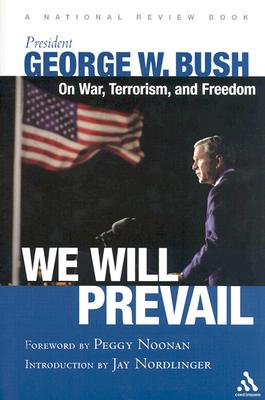 WE WILL PREVAIL ON WAR, TERRORISM, AND FREEDOM

Here are the authorized major speeches and statements by President George W. Bush on the most important issue facing the United States and perhaps the world today: global terrorism.
The book begins with the terrible events of September 11, 2001, and concludes on Memorial Day, May 31, 2003, following the end of the war in Iraq. We Will Prevail is a definitive and timely record of the new foreign-policy doctrines and international direction of the United States since 9/11.
It is inspiring, in the words of praise from President Bush for the people who lost their lives on that day - many in service to others - as well as in the global war on terror. This book is certain to spark controversy and be studied for years to come.
The White House counsel has approved this publication which includes State of the Union addresses from 2002 and 2003 as well as the speech from the deck of the aircraft carrier USS Abraham Lincoln.

Title: WE WILL PREVAIL ON WAR, TERRORISM, AND FREEDOM

WE WILL PREVAIL ON WAR, TERRORISM, AND FREEDOM