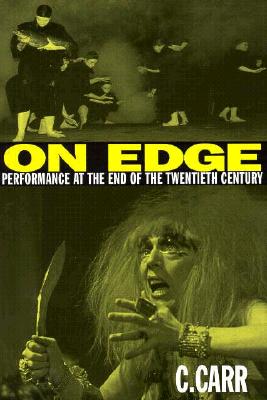 ON EDGE PERFORMANCE AT THE END OF THE TWENTIETH CENTURY

Through her engaged and articulate essays in the Village Voice, C. Carr has emerged as the cultural historian of the New York underground and the foremost critic of performance art. On Edge brings together her writings to offer a detailed and insightful history of this vibrant brand of theatre from the late 70s to today. It represents both Carr's analysis as a critic and her testament as a witness to performances which, by their very nature, can never be repeated.
Carr has organized this collection both chronologically and thematically, ranging from the emphasis on bodily manipulation/endurance in the 70s to the underground club scene in New York to an insider's analysis of the Tompkins Square Riot as a manifestation of the cultural and social conflicts that underlie much of performance art. She examines the transgressive and taboo-shattering work of Ethyl Eichelberger, Karen Finley, and Holly Hughes; documents specific performances by Annie Sprinkle and Lydia Lunch; and maps the development of such artists as Robbie McCauley, Blue Man Group, and John Jesurun. She also describes the "cross-over" phenomenon of the mid-80s and considers the far-right backlash against this mainstreaming as cultural reactionaries sought to curb the influence of these new artists.
CONTRIBUTORS: Linda Montano, Chris Burden, G.G Allin, Jean Baudrillard, Patty Hearts, Dan Quayle, Anne Magnouson, John Jesurun, John Kelly, Shu Lea Changvv, Diamanda Galas, Salley May, Rafael Mantanez Ortiz, Sherman Fleming, Kristine Stiles, Laurie Carlos, Jessica Hafedorn, Robbie McCormick, Karen Finley, Poopo Shiraishi, Donna Henes, Holey Hughe, Ela Troyano, Michael Smith, Harry Koipper, John Sex, Nina Jagen, EthylEichelberge, Marina Abramovic, Ulay.

Title: ON EDGE PERFORMANCE AT THE END OF THE TWENTIETH CENTURY

Description: 1993 GOOD+ SOFTCOVER, CLEAN AND BRIGHT [CARR, C] {STICKER INSIDE ON FFEP} PERFORMANCE AT THE END OF THE TWENTIETH CENTURY

ON EDGE PERFORMANCE AT THE END OF THE TWENTIETH CENTURY