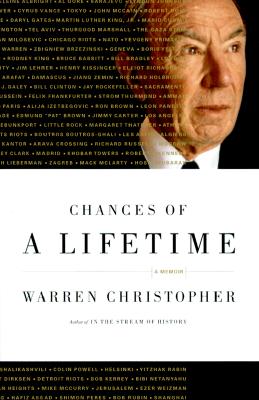 CHANCES OF A LIFETIME

AN ENGAGING INSIDER'S ACCOUNT OF SOME OF THE MOST FASCINATING DOMESTIC AND INTERNATIONAL EPISODES IN CONTEMPORARY AMERICAN HISTORY, FROM THE HIGHLY RESPECTED FORMER SECRETARY OF STATE WHO REMAINS A DEMOCRATIC ELDER STATESMAN.

Warren Christopher is that rarest of Washington personalities: a wise and witty public servant once described by the "Washington Post" as "the antithesis of the glitz-hungry, self-aggrandizing, corner-cutting political figures who dominate Washington today." In this memoir, the man whose sage counsel and sometimes parodied discretion brought him to the right hand of mayors, governors, and presidents, shares his personal recollections and impressions of leaders and events that shaped the second half of the twentieth century.

From "Starting from Scranton" and "The Johnson Treatment" to "Middle East: Antipodes" and "Yesterday a War, Today a Country," each chapter is a compelling story on its own. Together, they offer the first clear picture of the impact of this quiet North Dakotan on modernAmerican history.

Title: CHANCES OF A LIFETIME

CHANCES OF A LIFETIME