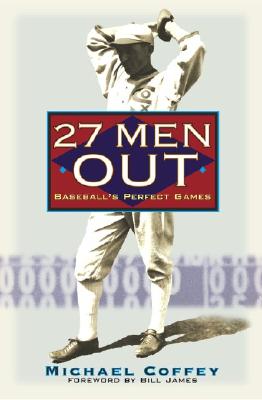 The first in-depth look at baseball's nirvana -- a lyrical history of pitching perfection.

There have been only fourteen perfect games pitched in the modern era of baseball; the great Cy Young fittingly hurled the first, in 1904, and David Cone pitched the most recent, in 1999. In between, some great pitchers -- Sandy Koufax, Catfish Hunter, Jim Bunning, and Don Larsen in the World Series -- performed the feat, as did some mediocre ones, like Len Barker and the little-known Charlie Robertson. Fourteen in 150,000 games: The odds are staggering.

When it does happen, however, the whole baseball world marvels at the combination of luck and skill, and the pitcher himself gains a kind of baseball immortality. Five years ago, Michael Coffey witnessed such an event at Yankee Stadium, and the experience prompted this expansive look at the history of these unsurpassable pitching performances. He brings his skills as a popular historian and poet to an appraisal of both the games themselves and of the wider sport of baseball and the lives of the players in it. The careers of each of the fourteen perfect-game pitchers are assessed, not only as to their on-the-field performances but with a regard for their struggles to persevere in an extremely competitive sport in which, more often than not, the men and women who run the game from the owners' boxes are their most formidable adversaries. Along the way, Michael Coffey brings us right into the ballparks with a play-by-play account of how these games unfolded, and relates a host of fascinating stories, such as Sandy Koufax's controversial holdout with Don Drysdale and its chilling effect on baseball's owners, Mike Witt's victimization by thebaseball commissioner, and Dennis Martinez's long struggle up from an impoverished Nicaraguan childhood.

Combining history, baseball, and a sweeping look at the changing face of labor relations, "27 Men Out" is a new benchmark in sports history.