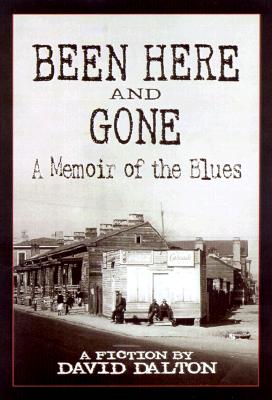 BEEN HERE AND GONE: A MEMOIR OF THE BLUES

Can I tell you about the blues?Baby, I was born with the blues...

So begins the fictional memoir Been Here and Gone, the extraordinary story of an all-but-forgotten bluesman, Coley Williams. A backup musician to some of the most famous and infamous figures in the annals of blues music, and a former recording artist in his own right, Williams had a backstage pass to a world that most of us could never even imagine. In 1998 at the astonishing age of one hundred and two, Williams agreed to tell his tale for the first time. We can only be thankful for the fruits this "collaboration" with renowned author David Dalton has yielded: as funny, furious and funky as a lick on a talking guitar, Dalton's rhythmic prose captures the inimitable voice of a man who walks it like he talks it without missing a beat.

From his youth as a tenant farmer on the Mississippi plantations to the Great Migration to the Northern cities, from his incarceration in the notorious Sugarland prison farm to the temptations of freedom on the open road, from the juke joints of the deep South to the stages of Swinging London, Coley Williams' life is at once the story of the blues and the story of the twentieth century. Across a hundred years of tumultuous change, we follow him through the hardships of the Flood of 1927 and the hardscrabble years of the Great Depression, the race riots of the 1960s and the birth of the Civil Rights movement. Along the way, Williams' vividly recounted anecdotes introduce us to the pantheon of blues legends whose paths he crossed: Charley Patton, Tommy Johnson, Bessie Smith, Blind Lemon Jefferson, Ma Rainey, T-Bone Walker, Muddy Waters, B.B. King, the immortal Robert Johnson, and even the young Elvis Presley. Raucous, rambunctious, and often downright dangerous, these larger-than-life musicians, singers, and all-around rabble-rousers live again in Williams' wonderfully colorful recollections. And of course, throughout it all, there is the music: whether it's the plaintive and lonely sound of the Mississippi Delta or Chicago's lowdown and dirty electric hellfire brew. Here is the boisterous blues in all its hues-salty and soulful and sad with a glimmer of hard-won hope always singing out beyond the last note.

Been Here and Gone is a highly personalpanorama of the century as seen and experiencedby one of the most remarkable figures in recentliterature. It is at once a wildly inventive epic, aheartfelt testament to the people and places of avanishing era, and an invaluable contribution tothe literature of - music and popular culture thatwill fascinate blues fans, history buffs, and generalreaders alike. If Coley Williams' story (to quotethe old son) was nearly the "Blues the WorldForgot," then Been Here and Gone is just the tonicwe need to refresh our memories and remindourselves of the vitality of this music and thepeople who have lived it. Here before us is theAmerican Century, set to the tune of the Americanmusic. Can I tell you about the blues? Baby, I wasborn with the blues...

Title: BEEN HERE AND GONE: A MEMOIR OF THE BLUES

BEEN HERE AND GONE: A MEMOIR OF THE BLUES