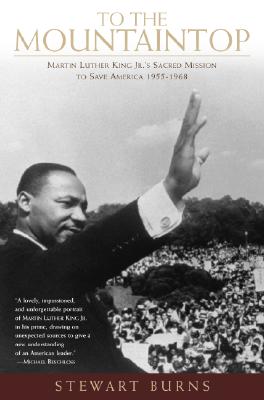 TO THE MOUINTAIN TOP MARTIN LUTHER KING JR.'S SACRED MISSION TO SAVE AMERICA 1955-1968

More than a biography, To the Mountaintop is the history of a turbulent epoch that changed the course of American and world history. Moral warrior and nonviolent apostle; man of God rocked by fury, fear, and guilt; rational thinker driven by emotional and spiritual truth -- Martin Luther King Jr. struggled to reconcile these divisions in his soul. Here is an intimate narrative of his intellectual and spiritual journey from cautious liberal, to reluctant radical, to righteous revolutionary. Stewart Burns draws not only on King's speeches, letters, writings, and well-reported strategizing and activities, but also on previously underutilized oral histories of key meetings and events, which present a dramatic account of King and the movement in the crucial years from 1955 to 1968.

In a striking departure from earlier books on Martin Luther King Jr. and the civil rights movement, Burns focuses on King's biblical faith and spiritual vision as fundamental to his political leadership and shows how these threads wove together a "single garment of destiny," making King the most important social prophet of the twentieth century. King is not portrayed as a lone exalted hero, butas the heart of a fabric of principled leadershipthat stretched from his closest colleagues to the movement's foot soldiers on the streets. This book stresses his shaping by other leaders -- heroic figures such as Bayard Rustin, Ella Baker, James Bevel, Bob Moses, and Marian Wright Edelman -- and his conflicted relationships with John and Robert Kennedy and Lyndon Johnson.

To the Mountaintop is uniquely powerful in presenting actual conversations between King and others, and in showing how King's public words often revealed his private torment. Burns provides a uniquely realist portrait of King and the civil rights movement by revealing the vital but neglected religious character of the story, and by demonstrating how King profoundly experienced the movement as a sacred mission following a path of liberation and sacrifice pioneered by Moses and Jesus.

TO THE MOUINTAIN TOP MARTIN LUTHER KING JR.'S SACRED MISSION TO SAVE AMERICA 1955-1968