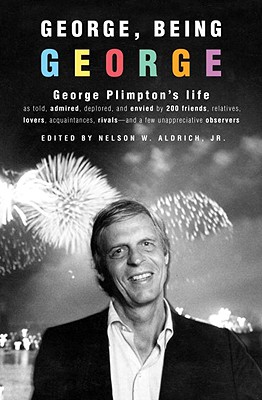 Norman Mailer said that George Plimpton was the best-loved man in New York. For more than fifty years, his friends made a circle whose circumference was vast and whose center was a fashionable tenement on New York's East Seventy-second street. Taxi drivers, hearing his address, would ask, "Isn't that George Plimpton's place?" George was always giving parties for his friends. It was one of the ways this generous man gave back.
This book is the party that was George's life-and it's a big one-attended by scores of people, including Peter Matthiessen, Robert Silvers, Jean Stein, William Styron, Maggie Paley, Gay Talese, Calvin Trillin, and Gore Vidal, as well as lesser-known intimates and acquaintances, each with candid and compelling stories to tell about George Plimpton and childhood rebellion, adult indiscretions, literary tastes, ego trips, loyalties and jealousies, riches and drugs, and embracing life no matter the consequences.
In "George, Being George" people feel free to say what guests say at parties when the subject of the conversation isn't around anymore. Some even prove the adage that no best-loved man goes unpunished. Together, they provide a complete portrait of George Plimpton. They talk about his life: its privileged beginnings, its wild and triumphant middle, its brave, sad end. They say that George was a man of many parts: "the last gentleman"; founder and first editor of one of our best literary magazines, " The Paris Review;" the graceful writer who brought the New Journalism to sports in bestsellers such as" Paper Lion, Bogey Man," and "Out of My League"; and Everyman's proxy boxer, trapeze artist, stand-up comic, Western movie villain, and" Playboy" centerfold photographer. And one of the brave men who wrestled Sirhan Sirhan, the armed assassin of his friend Bobby Kennedy, to the ground.
A Plimpton party was full of intelligent, funny, articulate people. So is this one. Many try hard to understand George, and some (not always the ones you would expect) are brilliant at it. Here is social life as it's actually lived by New York's elites. The only important difference between a party at George's and this book is that no one here is drunk. They just talk about being drunk.
George's last years were awesome, truly so. His greatest gift was to be a blessing to others-not all, sadly-and that gift ended only with his death. But his parties, if this is one, need never end at all.