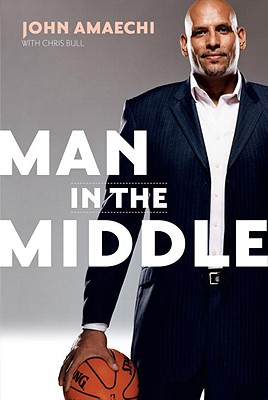 MAN IN THE MIDDLE

Man in the Middle chronicles John Amaechi's extraordinary journey from awkward, overweight English lad to jet-setting NBA star. Along the way, he endured endless obstacles to his hoop dreamsbeing abandoned by his father, being cut from his first college team, recovering from a life-threatening injury, playing for abusive coaches, and losing his mother -- while also protecting a vital secret that could have ended his career: John Amaechi was gay. Now in this poignant and intimate memoir, Amaechi takes us into the hypermasculine world of professional sports and into the very center of his soul. As tender as it is brutally frank, Man in the Middle follows him from the rough streets of Manchester to Penn State (where he first achieved basketball stardom and began to recognize his sexuality) to the cities (Orlando, Houston, Salt Lake City) and countries (Greece, France) in which he played. A moving story of adversity and diversity, Man in the Middle is a testament to the power of one man's convictions and to the universal desire to make the world a better place.

Title: MAN IN THE MIDDLE

MAN IN THE MIDDLE