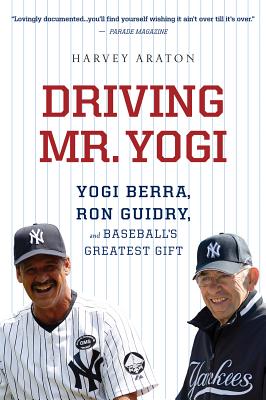 "Funny, revealing, and surprising . . . anything that brings new Yogi Berra stories is a good book." --MLB.com
"Driving Mr. Yogi" is the story of how a unique friendship between a pitcher and catcher is renewed every year. It began in 1999, when Yogi Berra was reunited with the Yankees after a long self-exile, the result of being unceremoniously fired by George Steinbrenner fourteen years before. A reconciliation between Berra and the Boss meant that Berra would attend spring training again. Guidry befriended "Mr. Yogi" instantly. After all, Berra had been a mentor in the clubhouse back when Guidry was pitching for the Yankees. Guidry knew the young players would benefit greatly from Mr. Yogi's encyclopedic knowledge of the game, just as Guidry had during his playing days, so he encouraged Berra to share his insights.
Soon, an offhand batting tip from Mr. Yogi turned Nick Swisher's season around. Stories about handling a hitter like Ted Williams or catching Don Larsen's perfect game captured their imaginations. And in Yogi, Guidry found not just an elder companion or source of amusement -- he found a best friend.
At turns tender and laugh-out-loud funny, and teeming with unforgettable baseball yarns that span more than fifty years, "Driving Mr. Yogi" is a universal story about the importance of wisdom being passed from one generation to the next, as well as a reminder that time is what we make of it and compassion never gets old.
"A refreshing change from the normal diet of sports books out there . . . A warm, sentimental look at a baseball icon." --"Tampa Tribune"