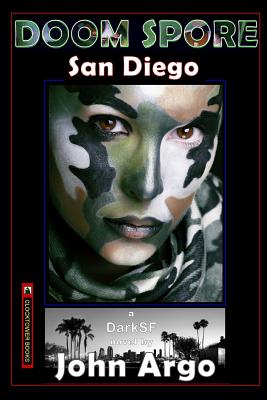 Doom Spore (a DarkSF Series novel) is a 'summer movie in a book' - dark, chilling, and hugely creepy science-horror fiction in the tradition of Invasion of the Body Snatchers, They Walked Like Men, and The Thing. As it turns out (the author didn't know this when writing it in 2003-5) Doom Spore reflects a true phenomenon - the entomopathogen fungus family, which turns ants and other insects into suicidal robots (zombies) to help the fungus thrive while the helpless victim (e.g., a carpenter ant) suffers a prolonged and terrifying death right out of your worst nightmares. More on that true science in a moment. Lt. Linsey Simon, San Diego Harbor Police, and her husband, hard-hitting reporter Jack Simon, are thrust headlong into the gripping case of a dangerous scientific experiment gone horribly wrong for corporate profit. This scary and entertaining story begins quietly and ominously in little homes in ordinary neighborhoods around San Diego. A boy named Jimmy Mendez, 9, and his cousin Maribel Walesky, 10, await the return of their dads (merchant sailors) from the sea. But the things that come home are not men. They look like sailors, but they are silent and empty-eyed, and are not the same dads who went to sea. At first, only the children can see this -not their mothers, nor any other adults--and nobody will believe them. Soon, people begin dying all over town, turning into alien spore carriers seeking their next victim to infect. The inhuman forces behind this are well organized by a corporation whose desperate and risky effort to develop a forbidden jungle-derived drug has gone horribly wrong. From a secret airstrip, in the Volcan Mountains east of San Diego, crop-dusting missions fly over the city to spread their spores more efficiently. By the time human authorities realize what confronts them, it's all but too late. Now it's up to Linsey and Jack, along with two brave children and a few hardy citizens, to save the world. San Diego, beautiful tourist capital of blue skies and balmy sea breezes, becomes a colony of the fungal or Fifth Kingdom of life on Earth. John Argo has written an entirely new and fresh premise here, using not the alien pods found in Jack Finney's 1955 classic The Body Snatchers, but a fungus horror from right here on Earth in the jungles of Peru. Amazingly, after publishing this book, the author learned that there are actually zombie fungus life forms in those very jungles. This is no joke. They are called entomopathogens, right out of the worst nightmares of science horror. That's science fiction gone dark and creepy (like Invasion of the Body Snatchers, The Thing, and similar stories). Doom Spore is fiction (so far) but entomopathogens are real. For example, the fungus Ophiocordyceps unilateralis (discovered in 1859 in a tropical rainforest) attacks insects including carpenter ants. The fungus seats itself on the ant's head, drills into the brain, and builds a kind of living console on top of the head. The ant's entire nervous system is now controlled by the fungus, making the ant into a zombie (literally). The fungus then controls the ant, forcing it to abandon its life and venture into areas where the temperature and humidity are best suited for fungal reproduction. There, the ant is then forced to attach itself to a leaf or similar perch until it dies from starvation and dehydration, overgrown with fungus as in the worst horror movie you can imagine. Even Doom Spore isn't quite as cruel, although Doom Spore is both terrifying and rewarding as a modern classic soon to be. Jack Finney's The Body Snatchers has been made and remade into movies at least three times. That's a sure sign a story is not just great, but an archetype that spawns endless homages. Doom Spore is an homage but not an imitation. Read it and you'll agree that Doom Spore is wildly fresh and original, and deserves to be made into a very scary, addictive movie.