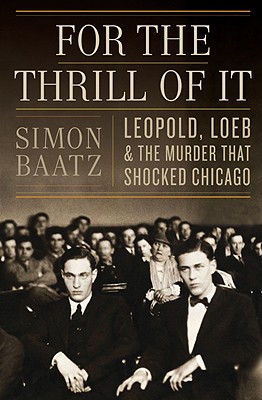 FOR THE THRILL OF IT: LEOPOLD, LOEB, AND THE MURDER THAT SHOCKED CHICAGO

It was a crime that shocked the nation, a brutal murder in Chicago in 1924 of a child, by two wealthy college students who killed solely for the thrill of the experience. Nathan Leopold and Richard Loeb had first met several years earlier, and their friendship had blossomed into a love affair. Both were intellectuals--too smart, they believed, for the police to catch them. However, the police had recovered an important clue at the scene of the crime--a pair of eyeglasses--and soon both Leopold and Loeb were in the custody of Cook County. They confessed, and Robert Crowe, the state's attorney, announced to newspaper reporters that he had a hanging case. No defense, he believed, would save the two ruthless killers from the gallows.

Set against the backdrop of the 1920s, a time of prosperity, self-indulgence, and hedonistic excess, For the Thrill of It draws the reader into a lost world, a world of speakeasies and flappers, of gangsters and gin parties, that existed when Chicago was a lawless city on the brink of anarchy. The rejection of morality, the worship of youth, and the obsession with sex had seemingly found their expression in this callous murder.

But the murder is only half the story. After Leopold and Loeb were arrested, their families hired Clarence Darrow to defend their sons. Darrow, the most famous lawyer in America, aimed to save Leopold and Loeb from the death penalty by showing that the crime was the inevitable consequence of sexual and psychological abuse that each defendant had suffered during childhood at the hands of adults. Both boys, Darrow claimed, had experienced a compulsion to kill, and therefore, he appealed to the judge, they should be spared capital punishment. However, Darrow faced a worthy adversary in his prosecuting attorney: Robert Crowe was clever, cunning, and charismatic, with ambitions of becoming Chicago's next mayor--and he was determined to send Nathan Leopold and Richard Loeb to their deaths.

A masterful storyteller, Simon Baatz has written a gripping account of the infamous Leopold and Loeb case. Using court records and recently discovered transcripts, Baatz shows how the pathological relationship between Leopold and Loeb inexorably led to their crime.

This thrilling narrative of murder and mystery in the Jazz Age will keep the reader in a continual state of suspense as the story twists and turns its way to an unexpected conclusion.

Title: FOR THE THRILL OF IT: LEOPOLD, LOEB, AND THE MURDER THAT SHOCKED CHICAGO

FOR THE THRILL OF IT: LEOPOLD, LOEB, AND THE MURDER THAT SHOCKED CHICAGO