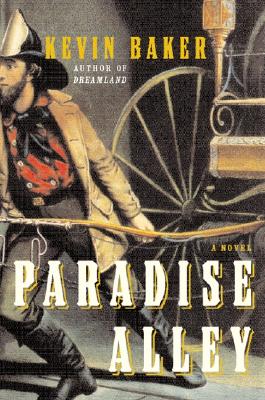 At the height of the Civil War, what begins with strong words and a few broken bottles will, over the course of five days, escalate into the worst urban conflagration in American history. Hundreds of thousands of poor Irish immigrants smolder with resentment against a war and a president that have cost them so many of their young men. When word spreads throughout New York's immigrant wards that a military draft is about to be implemented -- a draft from which any rich man's son with $300 can buy an exemption -- trouble begins to spill into the streets.

Down in the waterfront slum of Paradise Alley, three women -- Deirdre Dolan O'Kane, Ruth Dove, and Maddy Boyle -- struggle with their private fears as they wait for the storm to descend on them. Deirdre, whose lace-curtain sensibilities have always kept her at arm's length from her neighbors, is devastated by the discovery that her husband, Tom, has been wounded at Gettysburg. In her desperation, Deirdre must turn for aid and comfort to Ruth, a woman she has always judged as morally depraved.

Ruth, too, has been cut off from her husband, Billy Dove, an ex-slave. At dawn he set out for the Colored Orphans' Asylum uptown, to collect his last wages. But he has not returned by day's end, or by the next morning. In the meantime, Ruth has learned that dozens of black men and women have been lynched or beaten by rioters.

She begins to fear the worst, not just for Billy, but for herself and their children, too -- because she now knows that he is coming. He is Dangerous Johnny Dolan, Deirdre's estranged brother, who after fourteen years' exile has returned to New York. Years before, it was Johnny who saved Ruth from the famine in Ireland, who arranged for her steerage passage from Dublin to New York -- and who beat her mercilessly until she arranged to have him sent away for murder.

Even as the riot builds toward its violent climax, Dolan searches relentlessly for Ruth and Deirdre, carried along by the unruly mob. In the end, these remarkable women have nothing but one another to rely on as they seek to protect their homes and families from the brutality of a city -- and a nation -- gone mad. Paradise Alley a story of race and hatred, of love and war, of risk and dauntless courage.