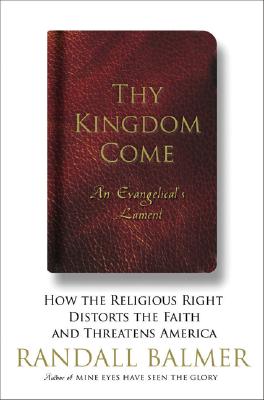 THY KINGDOM COME: AN EVANGELICAL'S LAMENT: HOW THE RELIGIOUS RIGHT DISTORTS THE FAITH AND THREATENS AMERICA

For much of American history, evangelicalism was aligned with progressive political causes. Nineteenth-century evangelicals fought for the abolition of slavery, universal suffrage, and public education. But contemporary conservative activists have defaulted on this majestic legacy, embracing instead an agenda virtually indistinguishable from the Republican Party platform. Abortion, gay marriage, intelligent design--the Religious Right is fighting, and winning, some of the most important political battles of the twentyfirst century. How has evangelical Christianity become so entrenched in partisan politics? Randall Balmer is both an evangelical Christian and a historian of American religion. Struggling to reconcile the contemporary state of evangelical faith in America with its proud tradition of progressivism, Balmer has headed to the frontlines of some of the most powerful and controversial organizations tied to the Religious Right. With a skillful combination of grassroots organization, ideological conviction, and media savvy, the leaders of the movement have mobilized millions of American evangelical Christians behind George W. Bush's hard-right political agenda. Deftly combining ethnographic research, theological reflections, and historical context, Balmer laments the trivialization of Christianity--and offers a rallying cry for liberal Christians to reclaim the noble traditions of their faith.

Title: THY KINGDOM COME: AN EVANGELICAL'S LAMENT: HOW THE RELIGIOUS RIGHT DISTORTS THE FAITH AND THREATENS AMERICA

THY KINGDOM COME: AN EVANGELICAL'S LAMENT: HOW THE RELIGIOUS RIGHT DISTORTS THE FAITH AND THREATENS AMERICA