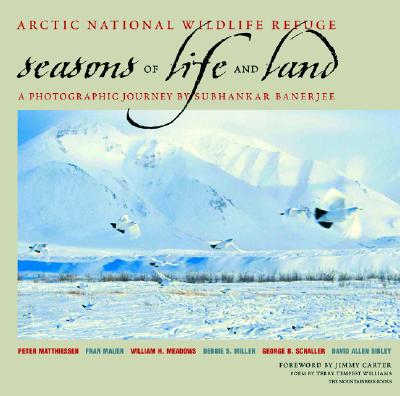 It is a land of pristine wilderness, pulsing with life even in the depths of white subzero winter. Entirely unscarred by roads or signs, it is the place in all Alaska where the polar bear most often prefers to den. It is host to more than 180 resident and migratory bird species that journey from six continents and all fifty states to nest and rear their young. Because of the massive herds of Porcupine caribou who converge upon the coastal plain to calve each spring, it is known as "the American Serengeti." To the Gwich' in people, who call the refuge their home, it is "The Sacred Place Where Life Begins."
The Arctic National Wildlife Refuge is a touchstone for all people, one of the few remaining ecosystems on our planet unaltered by human impact, where true wilderness can still be experienced. But now the refuge is showing signs of global warming: immense McCall Glacier, measured to have lost more than thirty feet in depth in the last forty years; the northward march of the dwarf willow, moving at a pace not seen in 8,000 years; the alarming decline of the muskox, forced to forage where their calves are vulnerable to predators. And the refuge is further threatened by oil development, which would forever unravel the delicate pattern of nature found here.
Award-winning photographer Subhankar Banerjee devoted two years of his life to documenting the land, its wild species, and its Native peoples. With Inupiat guide Robert Thompson, Banerjee traveled 4,000 miles through the refuge on foot and by raft, kayak, and snowmobile during all four seasons. With more than 200 breathtaking color images, "Arctic National Wildlife Refuge: Seasons of Life and Land" makes this case: leavingthe refuge intact in all its mysterious beauty is vital to the survival of this unique ecosystem. Banerjee' s photos are paired with six essays and a foreword by former president Jimmy Carter.