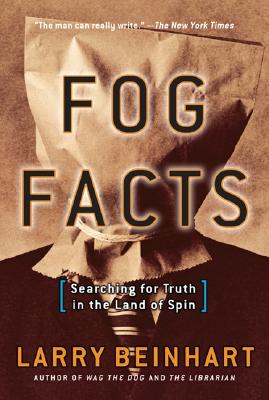 SMALL HARDBACK IN JACKET [BEINHART, LARRY] SEARCHING FOR TRUTH IN THE LAND OF SPIN

Everyone in the world knows what Bill Clinton did with Monica Lewinsky, or the sordid facts about the O.J. Simpson case. Ask them about the in and outs of the British Royal Family, or what happened to Brad and Jennifer and you'll find they're pretty clued in. These facts, or events, or factoids, mysteriously capture the world's attention and creates a media frenzy. But there's a flip side to this. Fog Facts -- the important things that nobody seems able to focus on anymore than they can focus on a single droplet in the mist. They are known, but not known; the sort of things that journalists and political junkies know, but somehow the world does not. Such as President Bush's war record (he doesn't have one), or how Dick Cheney became that rich. Who really won the election in Florida 2000 and how many people have perished since the invasion of Iraq. Beinhart's book is a dazzling and unsettling exploration of how this has come to pass, about "The Soft Machine," a mysterious mechanism that manufactures consent in a so-called democratic society and how ordinary citizens can fight back.

Title: FOG FACTS SEARCHING FOR TRUTH IN THE LAND OF SPIN