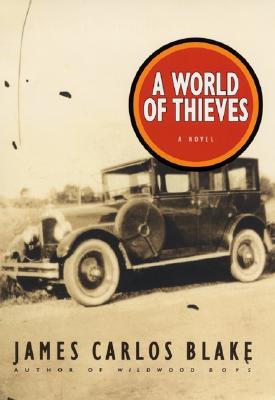 James Carlos Blake writes literary novels of adventure -- of daring exploits and desperate hearts, of men and women whose characters shape their fate. Now, in A World of Thieves, he renders a story of crime and love in the closing years of the Roaring Twenties.

In 1928 New Orleans, eighteen-year-old Sonny LaSalle is a top prep student and champion amateur boxer -- and he venerates his fraternal twin uncles, Buck and Russell, armed robbers who love their profession. Sonny secretly believes that he, too, is a natural outlaw and persuades his uncles to take him on as a partner. Their early robberies go smoothly, and Sonny begins an affair with Brenda Marie, a rich and free-spirited art dealer in the French Quarter. But when a bank job goes bad, Sonny is sent to jail, where he unintentionally kills a policeman, the son of the most feared lawman in Louisiana who is widely known as "John Bones." After nine months in the infamous Angola penitentiary, Sonny makes a harrowing escape and reunites with Buck and Russell -- unaware that he is being hunted by the vengeful John Bones.

Sonny and his uncles head for the boomtowns of West Texas, where the money flows as freely as the oil. But after one of their robberies erupts in a gunfight, one uncle is badly wounded and the other is arrested and sentenced to a prison road gang. As Sonny sets out to free his imprisoned uncle, he finds himself caught between conflicting loyalties, and the story hurtles toward a thundering climax as the relentless John Bones catches up with Sonny at last.

A jazz-age story of vibrant joy and violent conflict, reckless passion, and an implacable nemesis, A World of Thieves is at heart the tale of a young man's reckoning with the truth of his own soul.

Title: WORLD OF THIEVES, A