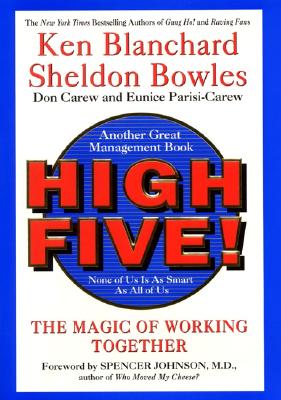 2001 HARDBACK IN JACKET [BLANCHARD, KEN & BOWLES, SHELDON] THE MAGIC OF WORKING TOGETHER

High Five combines the spellbinding charm of a timeless parable with cutting-edge information about why teams are important and what individuals and organizations can do to build successful ones.

Through the story of Alan Foster, a workplace one-man band, High Five identifies the four key ingredients of winning teams. Although Alan is an effective producer, he is unwilling to share the spotlight by partnering on projects and is fired because, as his boss puts it, "Alan, we need good producers who are good team players, too." It is a bitter pill for him to swallow.

While mulling over his disappointment, he takes his son to his grade-five hockey practice, where it is clear that his son's team, the Riverbend Warriors, knows nothing about teamwork, either. When the team's two overworked coaches learn of Alan's plight, they persuade him to join their ranks, and he finds himself charged with teaching himself and the players the meaning of teamwork. With the help of a woman friend-a former girls' basketball coach who has "won more high school basketball championships than anyone"-Alan and the Warriors learn the magic of teamwork and that "none of us is as smart as all of us."

With its simple style and easy-to-follow techniques, High Five is a must-read for anyone seeking to learn the value and power of teamwork.

Title: HIGH FIVE THE MAGIC OF WORKING TOGETHER