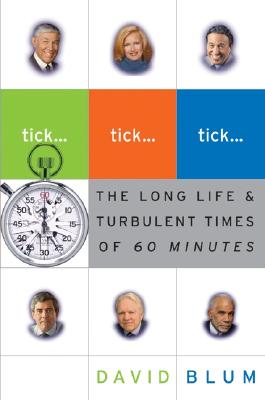 The story of how CBS's 60 Minutes grew from a little network experiment into a Sunday-night-at-seven addiction for most of the country would itself make a raucous and typically compelling 60 Minutes episode. Or, maybe, an opera, complete with rival tenors, backstage intrigues, imperious divas, vulnerable ingenues, tragic deaths, a handful of big and small wars, and a brilliant if maniacal maestro running the whole production. For two years, author David Blum talked to everybody connected to 60 Minutes, and, incredibly, everybody talked to him -- about themselves, about the show, about one another. Blum's unprecedented inside access takes us into story meetings, blood-on-the-wall editing sessions, turf wars, and to the heart of the rivalries and the myths -- who got hired, who got fired, who got screwed -- going as far back as theearliest black-and-white days.

And thirty-six years later, Hewitt's still there, pounding his desk, swearing at his tigers (most of whom are also still there), and holding in his tightly clenched fist the patent on the mother of all magazine shows.

Or, rather, he was, until just recently, when a bunch of younger guys in suits decided it was time to take 60 Minutes away from its eighty-one-year-old boss. The changes, the innovations, the stop-the-presses big stories -- for Hewitt, and maybe a couple of the others -- are, at last, winding down. But the story of the most successful and contentious program in TV history is not over yet: the new guys are settling in and the future is up for grabs.