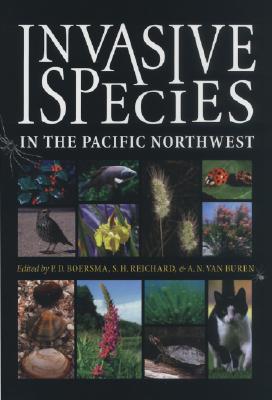 INVASIVE SPECIES IN THE PACIFIC NORTHWEST

The U.S. government defines invasive species as "an alien species whose introduction does or is likely to cause economic or environmental harm or harm to human health." Invasive Species in the Pacific Northwest describes these species, how they got here, and the effects of their invasions on the region's environment. Each of 108 invasive species of fish, plants, invertebrates, mammals, and birds -- including earthworms, domestic cats and pigs, blackberries, European fruit flies, Japanese eelgrass, Mediterranean mussels, rats, and terrestrial mollusks -- is described in a 2-page spread that includes a full-color photograph of the species, a map showing the species' presence in the region, plus:

-- Impact on communities and native species

Included are suggestions to help reduce the spread of invasive species; habitat preferences of Pacific Northwest invasive species; the World Conservation Union (ICUN) list of the world's 100 most invasive alien species; and a questionnaire designed to evaluate ecological impact and invasive potential.

Invasive species have been recognized as an environmental issue since Charles Darwin's voyage on the H.M.S. Beagle. Editors P. D. Boersma, S. E. Reichard, and A. N. Van Buren explore the intentional and accidental introductions of invasive species. Whether these species were deliberately brought to the Northwest for agricultural, horticultural, aquacultural, or hunting and fishing purposes, or accidentally introduced as stowaways and contaminants, knowledge about them is integral to the protection of our environment.

INVASIVE SPECIES IN THE PACIFIC NORTHWEST