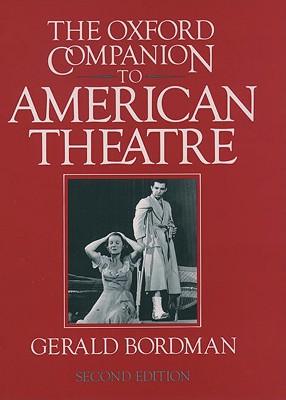 First published in 1984, Gerald Bordman's Oxford Companion to American Theatre has established itself as the standard one-volume source on our national theatre. It has been hailed for its "wealth of authoritative information" (Back Stage), for its "fascinating picture of the volative American stage" (The Guardian), for its "well-chosen, illuminating facts" (Newsday). The distinguished actor Jose Ferrer wrote "I'm in awe of the scholarship and research that have gone into the making of this book." And The Los Angeles Times called it "the almost perfect gift book for both the student and the theatre lover."
Now Bordman has thoroughly revised this redoubtable volume, once again providing a completely up-to-date guide to the American stage from its beginnings to the present. Here are over 3,000 entries on playwrights, plays, actors, directors, producers, songwriters, famous playhouses, dramatic movements, and much more. Readers will find summaries of plays as varied as The Contrast, Francesca da Rimini, Arsenic and Old Lace, Our Town, and Who's Afraid of Virginia Woolf?; biographical sketches of Edwin Forrest and Bartley Campbell, Lillian Hellman and David Rabe, John Barrymore and Jessica Tandy, George Gershwin and Cole Porter; and entries on groups such as The Actors Studio, Christy's Minstrels, and the Provincetown Players. For the new edition, Bordman has added entries on such recent plays as Fences, M. Butterfly, The Heidi Chronicles, and The Piano Lesson, as well as biographies of Len Cariou, Dustin Hoffman, Raul Julia, Tommy Tune, and August Wilson, to name a few. And as in the previous edition, Bordman gives readers as broad a picture of American popular theatre as possible, offering extensive coverage not only of classic works (such as Death of a Salesman) but also many commercially successful plays (such as Brother Rat or Getting Gertie's Garter), plus entries on foreign figures and productions that have influenced our dramatic development (from Shakespeare to Samuel Beckett and Harold Pinter).
Accessibly and attractively arranged in the two-column, A-Z format for which the Companion series is famous, this is a volume of enormous erudition, an essential reference for everyone who has a passion for the stage.