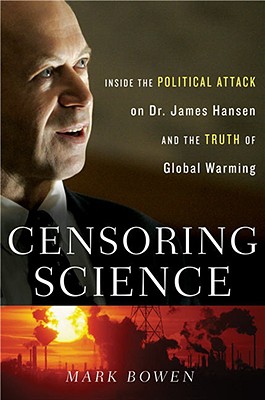 From acclaimed writer and physicist Mark Bowen, "Censoring Science" tells the true story of the Bush administration's censorship of the world's preeminent climatologist, and the science behind global warming that they do not want you to know.

The facts don?t lie:
? 2005 was the warmest year since the invention of the thermometer.
? 2006 is on track to become the hottest year ever recorded in the United States.
? The six hottest years on record have occurred in the last eight years, and the twenty-two hottest years on record have occurred in the last twenty-six years.
Preeminent climatologist and leading NASA scientist Dr. James Hansen has been studying climate for over three decades. It was his testimony to a Senate committee in 1988 that first brought the threat of global warming to the world's attention. In January 2006, news broke that the Bush administration had been attempting to censor Dr. Hansen?obscuring his message and suppressing the vast body of his scientific work, which unequivocally demonstrates the reality and immense danger of global warming.

Now, for the first time and with unfiltered access, writer and physicist Mark Bowen finally tells the exclusive story of Hansen's decades-long battle to bring the truth about global warming to light. "Censoring Science" illuminates the real science behind global warming and maintains that we can still prevent environmental disaster, while both strengthening our economy and our national security. In the tradition of Ron Suskind's blockbuster bestseller, "The Price of Loyalty, Censoring Science" exposes the truth behind the administration's spin doctors, and shares the inside story of one of the most important and influential scientists of our time.