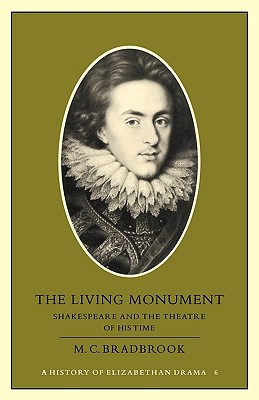 LIVING MONUMENT, THE SHAKESPEARE AND THE THEATRE OF HIS TIME

LIGHT WEAR [BRADBROOK, M.C.] SHAKESPEARE AND THE THEATRE OF HIS TIME

Powerful and diversified as it already was, theatrical life in London focused in 1576 upon the opening in Shoreditch of James Burbage's Arena Theatre. Here the plays of Shakespeare, with those of many other writers, shaped and were shaped by popular demand. His company, as Lord Hunsdon's Men, settled in the theatre from 1594 to 1598. The Arena was the model for a dozen later structures. In this book Professor Bradbrook characterizes Shakespeare's achievements and those of his contemporaries and endeavours to 'place' them in their social and differing theatrical contexts. Part I is concerned with the sociology of the theatre and traces the evolution of the new drama from the later years of Elizabeth into the more established conditions of Jacobean times. Part II shows the interaction of Jonson's work for the court with Shakespeare's for the popular stage. As the leading writer now for the King's Men at the Globe I, Shakespeare's reaction to Jonson's challenge and stimulus was an increasing use of romantic elements in his plays, as he integrated the material demanded by the very different audiences at the Globe, the Blackfriars and the court. Finally in Part III, she outlines the post-Shakespearean developments.

Title: LIVING MONUMENT, THE SHAKESPEARE AND THE THEATRE OF HIS TIME

LIVING MONUMENT, THE SHAKESPEARE AND THE THEATRE OF HIS TIME