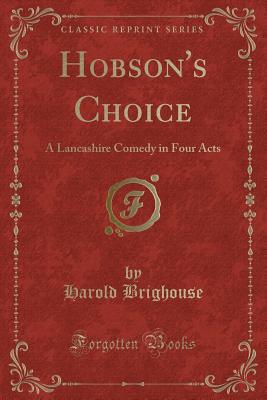 Excerpt from Hobson's Choice: A Lancashire Comedy in Four Acts

While it is necessary to bring this point forward, one would not seek to minimize the value and im portance of the local drama. Harold Brighouse is a Manchester man, and those of his plays which deal with Lancashire life are the most richly individualized. So, too, the most far-reaching result of Miss Horni man's Theatre has been the growth Of a Lancashire drama which has made Lancashire live for thousands where before it was no more than an empty name. It was the establishment in their midst of a theatre mainly devoted to the production Of new plays which gave Manchester writers an impetus toward the drama. That their output took the form, to a great extent, of local plays is probably largely due to the fortunate chance that the theatre Opened its doors at the time when the Irish Players, who gave the great stimulus to the Folk Drama, were in the meridian Of their success. In any case, there can be no question that Lancashire life is so rich in individual traits and its verbal expression is rendered so colorful by its uncompromising dialect that the dramatist found in it a rich-veined mine. About the Publisher Forgotten Books publishes hundreds of thousands of rare and classic books. Find more at www.forgottenbooks.com This book is a reproduction of an important historical work. Forgotten Books uses state-of-the-art technology to digitally reconstruct the work, preserving the original format whilst repairing imperfections present in the aged copy. In rare cases, an imperfection in the original, such as a blemish or missing page, may be replicated in our edition. We do, however, repair the vast majority of imperfections successfully; any imperfections that remain are intentionally left to preserve the state of such historical works.