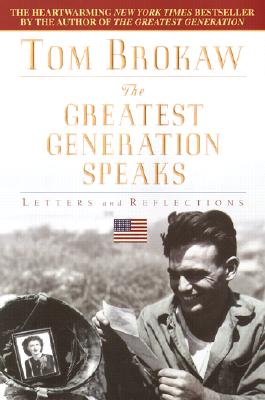 The heartwarming "New York Times" bestseller by the author of The Greatest Generation
"When I wrote about the men and women who came out of the Depression, who won great victories and made lasting sacrifices in World War II and then returned home to begin building the world we have today ... it was my way of saying thank you. I was not prepared for the avalanche of letters and responses touched off by that book.
"I had written a book about America, and now America was writing back."
Tom Brokaw touched the heart of the nation with his towering #1 bestseller The Greatest Generation, a moving tribute to those who gave the world so much -- and who left an enduring legacy of heroism and grace. The Greatest Generation Speaks was born out of the vast outpouring of letters Brokaw received from people eager to share their personal memories and experiences of a momentous time in America's history.
These letters and reflections cross time, distance, and generations as they give voice to lives forever changed by war: eighty-year-old Clarence M. Graham, who recounts his harrowing experience as a soldier captured by the Japanese -- and provides a gripping eyewitness account of the dropping of the atomic bomb; Patricia Matthews Dorph, a soldier's daughter who shares the love letters her parents exchanged during the war, a lasting legacy of passion, devotion, and enduring love; Rabbi Judah Nadich, the first Jewish chaplain to serve in the war; Lorraine Davis, a civilian who helped form the Club of '44, a group of wartime wives who still meet today.
From the front lines of battle to the back porches of beloved hometowns, The Greatest Generation Speaks brings to life the hopes anddreams of a generation who fought our most hard-won victories, and whose struggles and sacrifices made our future possible.