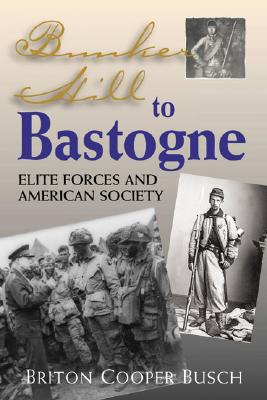 America's curiosity about elite military units is greater than ever in today's crisis-ridden world. And while numerous books have examined the various elite forces, Bunker Hill to Bastogne goes much further to show the relationship between these special units and the societies that gave birth to them. Though America in general has often regarded its military establishment as an unfortunate necessity, elite formations have nearly always emerged in moments of crisis. And while their exploits have fostered the cherished image of the individualistic but loyal rifleman-ranger, these legends have not always corresponded to reality. America's roster of heroic images has long included esteemed elite units, running the gamut from Roger's Rangers at Fort Ticonderoga during the American Revolution to Berdan's Sharpshooters during the Civil War and the paratroopers of Normandy in World War II. But despite Americans' reverent regard for, and patriotic depiction of, elite units, they initially distrusted the idea of a standing army given such abuses as the quartering of soldiers in citizens' homes. Indeed, the egalitarian American spirit caused the Founding Fathers to discourage a class of emperor-making military elites. And yet, elite units did emerge during every major American conflict. But the evolution of such forces has taken place in fits and starts, with units often demobilizing after a particular crisis had passed. Only since World War II have elite units become a consistently relied-upon arm of the military for dealing with constantly erupting global crises. Bunker Hill to Bastogne is a unique and timely chronicle of the birth and evolution of elite forces and the American public's reactions to them. It shows that despite Americans' wariness of a possible military elite, their love of the fabled rifleman-ranger has seldom dwindled, though in the twenty-first century their hero might wear a green beret rather than a coonskin cap.