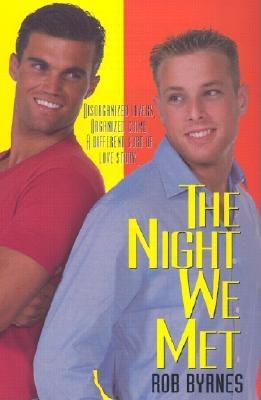 NIGHT WE MET, THE

Rob Byrne's wickedly funny debut novel is a thoroughly contemporary and completely off-the-wall variation on classic screwball comedy: Boy gets gorgeous Mafia boyfriend, boy loses Mafia boyfriend and nearly gets whacked by most of New York, boy gets Mafia boyfriend back -- and gets more than he bargained for.

Andrew Westlake -- gay, 35, and barely scraping by in Manhattan -- has two dreams, neither of which has come true. He has yet to become the literary voice of his generation. And he most definitely has not met Mr. Right. Now, stuck in a dead-end publishing job, and nursing a broken heart, Andrew is resigned to a life of anti-fabulousness...until the night he meets dark, hunky Frank DeBenedetto. With his confident way of taking care of things and his shy demeanor in the bedroom, Frank wins Andrew over. But problems arise when Frank turns out to be the son of the Maria's top boss, and he's engaged to Anna Franco -- daughter of "Crazy Tommy" Franco -- a woman who does not take to catching her fiance in the act of becoming a "made man."

Suddenly, Andrew's once-boring life is heating up with enough action to fuel ten novels...if only he can keep his very cute butt intact and his man from ending up on a Most Wanted poster. From a couple of "sensitivity-trained" cops to a persistent FBI agent...from guys with nicknames that all have to do with pain to a Mafia princess whose hair is nearly as big as her mouth...from ex-lovers, drag queens, and suspicious doormen to a cast of other characters as zany as New York itself, "The Night We Met" is a frantic, nonstop, madcap romp through a wild romance no reader will be able to refuse.

Title: NIGHT WE MET, THE

NIGHT WE MET, THE