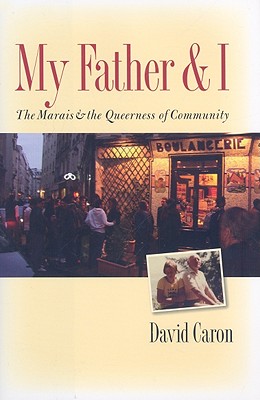 MY FATHER & I THE MARAIS & THE QUEERNESS OF COMMUNITY

HB IN DJ [CARON, DAVID] {LGBT} THE MARAIS & THE QUEERNESS OF COMMUNITY

"It is a living museum of a long-gone Jewish life and, supposedly, a testimony to the success of the French model of social integration. It is a communal home where gay men and women are said to stand in defiance of the French model of social integration. It is a place of freedom and tolerance where people of color and lesbians nevertheless feel unwanted and where young Zionists from the suburbs gather every Sunday and sometimes harass Arabs. It is a hot topic in the press and on television. It is open to the world and open for business. It is a place to be seen and a place of invisibility. It is like a home to me, a place where I feel both safe and out of place and where my father felt comfortable and alienated at the same time. It is a place of nostalgia, innovation, shame, pride, and anxiety, where the local and the global intersect for better and for worse. And for better and for worse, it is a French neighborhood."--from My Father and IMixing personal memoir, urban studies, cultural history, and literary criticism, as well as a generous selection of photographs, My Father and I focuses on the Marais, the oldest surviving neighborhood of Paris. It also beautifully reveals the intricacies of the relationship between a Jewish father and a gay son, each claiming the same neighborhood as his own. Beginning with the history of the Marais and its significance in the construction of a French national identity, David Caron proposes a rethinking of community and looks at how Jews, Chinese immigrants, and gays have made the Marais theirs.These communities embody, in their engagement of urban space, a daily challenge to the French concept of universal citizenship that denies them all political legitimacy. Caron moves from the strictly French context to more theoretical issues such as social and political archaism, immigration and diaspora, survival and haunting, the public/private divide, and group friendship as metaphor for unruly and dynamic forms of community, and founding disasters such as AIDS and the Holocaust. Caron also tells the story of his father, a Hungarian Jew and Holocaust survivor who immigrated to France and once called the Marais home.

Title: MY FATHER & I THE MARAIS & THE QUEERNESS OF COMMUNITY

MY FATHER & I THE MARAIS & THE QUEERNESS OF COMMUNITY