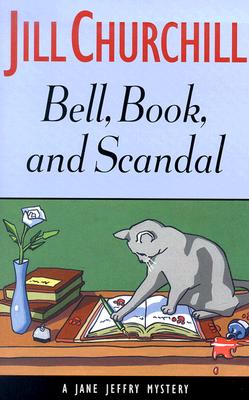 You can't judge a book by its cover. To look at her, one would never think suburbanite homemaker Jane Jeffry would be interested in murder and mayhem. But after all the corpses she's come across -- and killers she's unmasked -- she's practically an expert on the subject. Which is why, with best buddy Shelley Nowack in tow, Jane's booking down to a nearby mystery writers' convention to mingle with the brightest lights of literary crime . . . and maybe drum up some interest in her own recently completed manuscript.

They're all there: editors, agents, publishing bigwigs, and famous authors like Jane and Shelley's personal fave, Felicity Roane. Even Jane's longtime honey, Detective Mel VanDyne, is a scheduled guest speaker. Of course there are bound to be some bad apples in the bunch: macho-malicious literary critic-cum-snake Zac Zebra, for example, and loudmouth Vernetta Strausmann, who self-published her despicable whodunit and successfully hawked it on the Internet.

However, what would a mystery convention be without a mystery? So one is graciously supplied when a famous ego-squashing editor keels over at the speaker's podium, undone by an anonymous poisoner. And when a much-hated book-bashing journalist is himself bashed quite nastily in the parking lot, it seems fairly certain that at least one real-life murderer is stalking the proceedings. But who is he/she/them? The dirt-dishing, pseudonymous Internet gossip monger "Ms. Mystery," who's lurking around there somewhere? The local bookseller who dearly loves "Modern Golden Age" women writers? The avid reader who seems to know a bit too much about the personal lives of the famous attendees?

Jane and Shelley are on the case, ready to snoop, eavesdrop, and gossip their way to a solution. But the killer they seek is no open book . . . and may turn out to be harder -- and deadlier -- to read than they initially imagined.