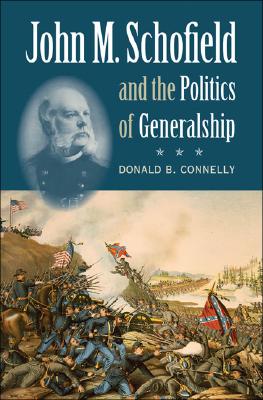 By: CONNELLY, DONALD B.

In the first full biography of Lieutenant General John McAllister Schofield (1831-1906), Donald B. Connelly examines the career of one of the leading commanders in the western theater during the Civil War. In doing so, Connelly illuminates the role of politics in the formulation of military policy, during both war and peace, in the latter half of the nineteenth century.

Connelly relates how Schofield, as a department commander during the war, had to cope with contending political factions that sought to shape military and civil policies. Following the war, Schofield occupied every senior position in the army--including secretary of war and commanding general of the army--and became a leading champion of army reform and professionalism. He was the first senior officer to recognize that professionalism would come not from the separation of politics and the military but from the army's accommodation of politics and the often contentious American constitutional system.

Seen through the lens of Schofield's extensive military career, the history of American civil-military relations has seldom involved conflict between the military and civil authority, Connelly argues. The central question has never been whether to have civilian control but rather which civilians have a say in the formulation and execution of policy.