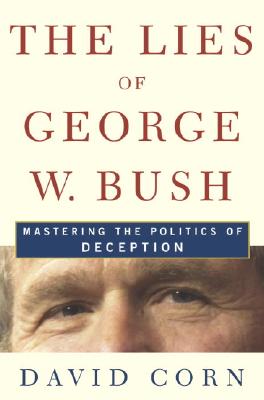 LIES OF GEORGE BUSH, THE MASTERING THE POLITICS OF DECEPTION

In what will be one of the most quoted and controversial political books of the year, David Corn identifies a litany of blatant lies as well as more subtle distortions and deceptions in making an iron-clad case that George W. Bush has purposely misled the American public. The list of fabrications includes attempts to hide the real impact of the tax cut; misleading statements to generate support for the campaign for war with Iraq; efforts to thwart corporate reforms even while claiming to support them; and disingenuous claims made to put a benevolent face on destructive anti-environmental measures. Like several recent politically charged bestsellers of both the left and the right, The Lies of George W. Bush pulls no punches and empowers readers with the hard, cold facts they crave in order to hold their own in the raging political debate.

Title: LIES OF GEORGE BUSH, THE MASTERING THE POLITICS OF DECEPTION

LIES OF GEORGE BUSH, THE MASTERING THE POLITICS OF DECEPTION