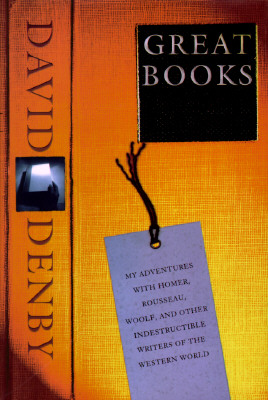 GREAT BOOKS MY ADVENTURES WITH HOMER, ROUSSEAU, WOOLF, AND OTHER INDESTRUCTIBLE WRTIERS

PLEASE NOTE: THIS COPY MAY BE HARDBACK IN JACKET [ 9/1996] [DENBY, DAVID] MY ADVENTURES WITH HOMER, ROUSSEAU, WOOLF, AND OTHER INDESTRUCTIBLE WRTIERS

At the age of forty-eight, film critic David Denby, dissatisfied with his life within the media bubble, went back to Columbia University and took again the two famous courses in Western classics (Literature Humanities and Contemporary Civilization) required of all students--courses he first took in 1961. In recent years, collections of literary and philosophical masterpieces such as those taught in these courses have been reviled by the left as oppressive and exclusionary and adored by the right as bulwarks of patriotism. Denby, the film critic for New York magazine, wanted to dispel these cliches and to confront the books in their naked power; he wanted to find the self he had lost in a daze of media images. In Great Books, Denby lives the common adult fantasy of returning to school with some worldly knowledge and experience of life. A gifted storyteller, he leads us on a glorious tour--by turns eloquent, witty, and moving--through the works themselves and through his experiences as a middle-aged man among freshmen. He recounts his failures and triumphs as a reader and student (taking an exam led to a hilarious near-breakdown). He celebrates his rediscovery or new appreciation of such authors as Homer, Plato, the biblical writers, Augustine, Boccaccio, Hegel, Austen, Marx, Nietzsche, and Virginia Woolf. He re-creates the atmosphere of the classroom--the strategies used by a remarkable group of teachers and the strengths and weaknesses of media-age students as they grapple with these difficult, sometimes frightening works. And all year long he watches the students grow and his own life and memories break out of hiding. The result is an extraordinarily engaging blend ofcriticism, reporting, autobiography, and cultural commentary, a book about self-discovery. Denby offers a nonprofessor's look at life on campus; he addresses the vexing questions of political correctness and relativism, and he suggests that a larger crisis surrounds the teaching of the humanities. A liberal defending the canon, Denby places literature in its revolutionary role as the source of powerful stories--the most powerful stories that we tell about ourselves. For the reader who once read these works, the book is a brilliant reprise; for the reader unfamiliar with them, Great Books offers an irresistible introduction. By the end, the great works are revealed again in their power to disturb and give pleasure.

Title: GREAT BOOKS MY ADVENTURES WITH HOMER, ROUSSEAU, WOOLF, AND OTHER INDESTRUCTIBLE WRTIERS

Keywords: PLEASE NOTE: THIS COPY MAY BE HARDBACK IN JAC,

GREAT BOOKS MY ADVENTURES WITH HOMER, ROUSSEAU, WOOLF, AND OTHER INDESTRUCTIBLE WRTIERS