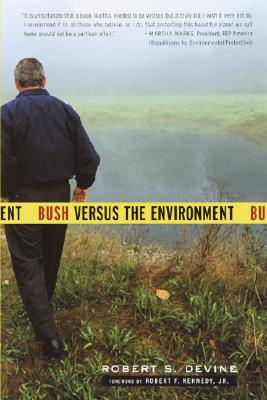 BUSH VERSUS THE ENVIRONMENT

Since becoming president, George W. Bush has walked away from the Kyoto Protocol, pushed for oil drilling in the Arctic National Wildlife Refuge, undermined protections for endangered species and wilderness, and retreated from his campaign pledge to regulate carbon dioxide. But the president's agenda reaches deeper than these well-known policies. In Bush Versus the Environment, Robert Devine shows how the White House is quietly undermining the entire system of environmental safeguards that has developed over the past thirty years. The administration's tactics include:

-Encouraging lawsuits against the federal government that challenge existing environmental laws, and then feebly defending the cases in court.
-Ignoring science that doesn't support the president's goals, and pressuring government scientists to produce the results the administration wants.
-Using fuzzy math to overestimate the costs and underestimate the benefits of regulations that protect human health and the environment, which can lead to the elimination of much-needed rules. These are just a few of the administration's strategies, which are being pursued beneath the radar of a public that overwhelmingly supports environmental protections. Bush Versus the Environment is a compelling and important look at one of the most important issues facing America today, one that will have consequences that last long after Bush has left office.

Title: BUSH VERSUS THE ENVIRONMENT

BUSH VERSUS THE ENVIRONMENT