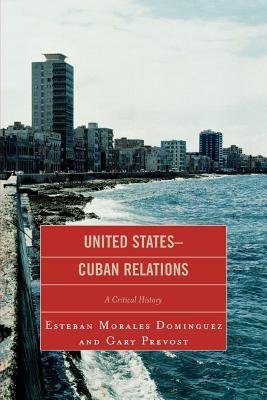 United States-Cuban Relations breaks new ground in its treatment of this long and tumultuous relationship. The overall approach, mirroring the political science background of both authors, does not focus on historical detail that has been provided by many other works, but rather on a broad analysis of trends and patterns that have marked the long relationship between the two countries. Dominguez and Prevost argue that U.S. policy toward Cuba is driven in significant measure by developments on the ground in Cuba. From the U.S. intervention at the time of the Cuban Independence War to the most recent revisions of U.S. policy in the wake of the Powell Commission, the authors demonstrate how U.S. policy adjusts to developments and perceived reality on the island. The final chapters of the book focus on the contemporary period, with particular emphasis on the changing dynamic toward Cuba from U.S. civil society. Dominguez and Prevost describe how the U.S. business community, fearful of being isolated from Cuba's reinsertion in the world's capitalist markets, have united with long-standing opponents of the U.S. embargo to win the right to sell food and medicines to Cuba over the last four years. Ultimately, the authors are realists about the possibility of better relations between the U.S. and Cuba, pointing out that, short of the collapse of Cuba's current political and economic system, fundamental change in U.S. policy toward the island is unlikely in the immediate future.