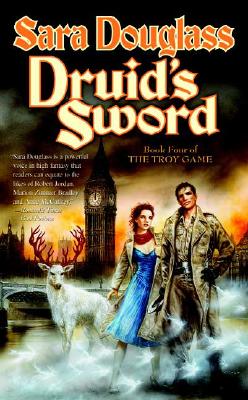 World War II London: The Blitz has all Londoners in its grip and people struggle to survive amidst the terror and chaos of constant bombardment. But is it just Hitler's Luftwaffe that is responsible for all the death and destruction that the city is facing? Brutus, the Greek Kingman who brought the bands of power to the isle of Alba millennia ago, once again walks the streets of London, this time as an American major. The men and women who are his eternal companions (and sometimes lovers and enemies) have been reborn in this time and place and all have come together for one last battle to complete the magical Labyrinth buried at the heart of the city. Half completed and resonating with an evil power, the Maze calls to them to finish the Game and possibly set all the players free.
But there is a new power that walks the land. It is a power that none anticipated and it has its own agenda. And by its actions could change the world forever. "Druid's Sword" is the fourth and concluding volume in Sara Douglass's compelling Troy Game series, a riveting historical fantasy series of love and revenge set against the very fabric of time itself.