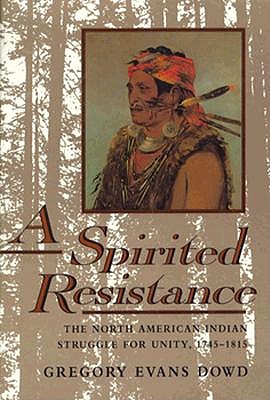 SPIRTED RESISTANCE, A THE NORTH AMERICAN INDIAN STRUGGLE FOR UNITY, 1745-1815

In the early 1800s, when once-powerful North American Indian peoples were being driven west across the Mississippi, a Shawnee prophet collapsed into a deep sleep. When he awoke, he told friends and family of his ascension to Indian heaven, where his grandfather had given him a warning: "Beware of the religion of the white man: every Indian who embraces it is obliged to take the road to the white man's heaven; and yet no red man is permitted to enter there, but will have to wander about forever without a resting place."

The events leading to this vision are the subject of A Spirited Resistance, the poignant story of the Indian movement to challenge Anglo-American expansionism. Departing from the traditional confines of the history of American Indians, Gregory Evans Dowd carefully draws on ethnographic sources to recapture the beliefs, thoughts, and actions of four principal Indian nations--Delaware, Shawnee, Cherokee, and Creek. The result is a sensitive portrayal of the militant Indians--often led by prophets--who came to conceive of themselves as a united people, and launched an intertribal campaign to resist the Anglo-American forces.

Dowd also uncovers the Native American opposition to the movement for unity. That opposition, he finds, was usually the result of divisions within Indian communities rather than intertribal rivalry. In fact, Dowd argues, intertribal enmity had little to do with the ultimate failure of the Indian struggle; it was division within Indian communities, colonial influence on Indian government, and the sheer force of the Anglo-American campaign that brought the Indian resistance movement to an end. An evocative history of long frustration and ultimatefailure, A Spirited Resistance tells of a creative people, whose insights, magic, and ritual add a much-needed dimension to our understanding of the American Indian.

SPIRTED RESISTANCE, A THE NORTH AMERICAN INDIAN STRUGGLE FOR UNITY, 1745-1815