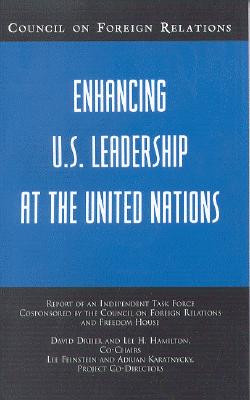 ENHANCING U. S. LEADERSHIP AT THE UNITED NATIONS

Enhanced American leadership at the United Nations serves the US interest and can also help strengthen the UN and the international system. This potential has been undermined, however, by several obstacles, some created by the United States (the withholding of treaty-obligated dues), and some that are inherent in the UN system (the regional group structure). This report suggests ways to build further support for democratization around the world, promote respect for human rights principles, and co-operate more fully in the war against terrorism. While it is critical of certain discrepancies within the UN system, the task force acknowledges that many UN programmes are both essential and effective. It seeks to build on these gains to promote sustainable democracy, a larger role for the United States, and more systematic co-operation between the United States and the European Union within the UN.

Title: ENHANCING U. S. LEADERSHIP AT THE UNITED NATIONS

ENHANCING U. S. LEADERSHIP AT THE UNITED NATIONS