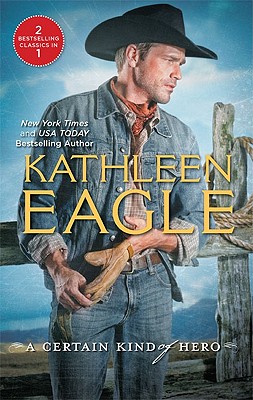 CERTAIN KIND OF HERO, A

Two bad boys find redemption when they become unlikely heroes to two very special women and their families. Don't miss these romantic favorites from "New York Times" and "USA TODAY" bestselling author Kathleen Eagle
"Defender"
Gideon Defender understood hard choices. Innocent and pure, Raina McKenny had deserved someone better than him, so he'd stepped aside and watched her marry his brother. He'd stayed away when they adopted a baby and created the perfect life he could never offer her. Now, fifteen years later, Raina had returned to the reservation a widow with her fatherless teenage son in tow, and Gideon faced the toughest choices of his life. Between desire and duty, between condemnation and trust, between fatherhood and honor...and even between life and death.
"Broomstick Cowboy"
Amy Becker needed a man. Tate Harrison wouldn't have been her first choice...but then, her first choice had gone and died, leaving her pregnant, broke and on the verge of losing everything. Surprisingly, Tate was a good father figure to her children, a tireless worker and far too tempting during those long winter nights. But Tate wasn't one for roots; he was hers only until spring. Unless she could convince him to stay.

Title: CERTAIN KIND OF HERO, A

CERTAIN KIND OF HERO, A