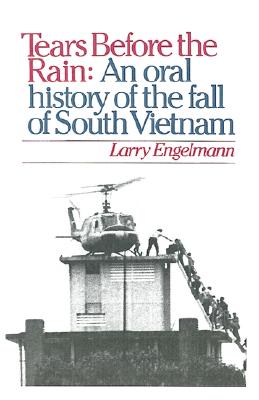 TEARS BEFORE THE RAIN: AN ORAL HISTORY OF THE FALL OF SOUTH VIETNAM

CBS camera-man Mike Marriott was on the last plane to escape from Danang before it fell in the spring of 1975. The scene was pure chaos: thousands of panic-stricken Vietnamese storming the airliner, soldiers shooting women and children to get aboard first, refugees being trampled to death. Marriott remembers standing at the door of the aft stairway, which was gaping open as the plane took off. "There were five Vietnamese below me on the steps. As the nose of the aircraft came up, because of the force and speed of the aircraft, the Vietnamese began to fall off. One guy managed to hang on for a while, but at about 600 feet he let go and just floated off--just like a skydiver.... What was going through my head was, I've got to survive this, and at the same time, I've got to capture this on film. This is the start of the fall of a country. This country is gone. This is history, right here and now."
In Tears Before the Rain, a stunning oral history of the fall of South Vietnam, Larry Engelmann has gathered together the testimony of seventy eyewitnesses (both American and Vietnamese) who, like Mike Marriott, capture the feel of history "right here and now." We hear the voices of nurses, pilots, television and print media figures, the American Ambassador Graham Martin, the CIA station chief Thomas Polgar, Vietnamese generals, Amerasian children, even Vietcong and North Vietnamese soldiers. Through this extraordinary range of perspectives, we experience first-hand the final weeks before Saigon collapsed, from President Thieu's cataclysmic withdrawal from Pleiku and Kontum, (Colonel Le Khac Ly, put in command of the withdrawal, recalls receiving the order: "I opened my eyes large, large, large. I thought I wasn't hearing clearly") to the last-minute airlift of Americans from the embassy courtyard and roof ("I remember when the bird ascended," says Stuart Herrington, who left on one of the last helicopters, "It banked, and there was the Embassy, the parking lot, the street lights. And the silence").
Touching, heroic, harrowing, and utterly unforgettable, these dramatic narratives illuminate one of the central events of modern history. "It was like being at Waterloo," concludes Ed Bradley of 60 Minutes. "It was so important, so historical. And today it is still very obvious that we Americans have not recovered from Vietnam....Nothing else in my lifetime was as important as that--as important as Vietnam."

Title: TEARS BEFORE THE RAIN: AN ORAL HISTORY OF THE FALL OF SOUTH VIETNAM

TEARS BEFORE THE RAIN: AN ORAL HISTORY OF THE FALL OF SOUTH VIETNAM