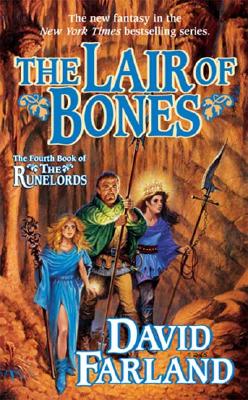 Certain works of fantasy are immediately recognizable as monuments, towering above the rest of the category. They have been written by the likes of Stephen R. Donaldson, Robert Jordan, and Terry Goodkind. Now add to that list David Farland, whose epic fantasy series began with The Runelords, continued in Brotherhood of the Wolf and the New York Times bestseller Wizardborn, and reaches its peak now in The Lair of Bones.

Prince Gaborn, the Earth King, has defeated the forces arrayed against him each time before: the magical and human forces marshaled by Raj Ahten, who seeks immortality at any cost and has given up his humanity in trade; and the inhuman, innumerable, insectile hordes of the giant Reavers from under the Earth, whose motives are unknowable, but inimical to human life. Now there must be final confrontations, both on the field of battle, with the supernatural creature that Raj Ahten has become, and underground, in the cavernous homeland of the Reavers, where the sorcerous One True Master who rules them all lies in wait--in the Lair of Bones. The survival of the human race on Earth is at stake.

Title: LAIR OF BONES, THE RUNELORDS #004