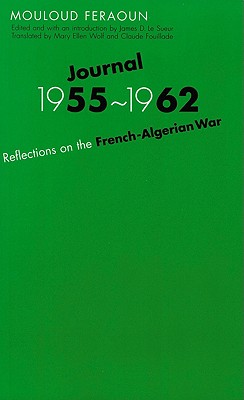 JOURNAL 1955-1962 REFLECTIONS ON THE FRENCH-ALGERIAN WAR

"This honest man, this good man, this man who never did wrong to anyone, who devoted his life to the public good, and who was one of the greatest writers in Algeria, has been murdered. . . . Not by accident, not by mistake, but called by his name and killed with preference." So wrote Germaine Tillion in Le Monde shortly after Mouloud Feraoun's assassination by a right wing French terrorist group, the Organisation Armee Secrete, just three days before the official cease-fire ended Algeria's eight-year battle for independence from France. However, not even the gunmen of the OAS could prevent Feraoun's journal from being published. Journal, 1955-1962 appeared posthumously in French in 1962 and remains the single most important account of everyday life in Algeria during decolonization. Feraoun was one of Algeria's leading writers. He was a friend of Albert Camus, Emmanuel Robles, Pierre Bourdieu, and other French and North African intellectuals. A committed teacher, he had dedicated his life to preparing Algeria's youth for a better future. As a Muslim and Kabyle writer, his reflections on the war in Algeria afford penetrating insights into the nuances of Algerian nationalism, as well as into complex aspects of intellectual, colonial, and national identity. Feraoun's Journal captures the heartbreak of a writer profoundly aware of the social and political turmoil of the time. This classic account, now available in English, should be read by anyone interested in the history of European colonialism and the tragedies of contemporary Algeria. James D. Le Sueur is an associate professor of history at the University of Nebraska-Lincoln. He is the editor of The Decolonization Reader and The Decolonization Sourcebook and the author of Uncivil War: Intellectuals and Identity Politics during the Decolonization of Algeria, Second Edition (Nebraska 2005). He contributed new material to Ben Abro's Assassination July 14 and Henri Alleg's The Question, both available in Bison Books editions. Mary Ellen Wolf is an associate professor of French at New Mexico State University and the author of Eros under Glass: Psychoanalysis and Mallarme's "Herodiade." Claude Fouillade is an associate professor of French at New Mexico State University.

JOURNAL 1955-1962 REFLECTIONS ON THE FRENCH-ALGERIAN WAR