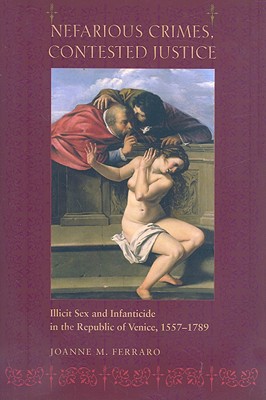 NEFARIOUS CRIMES, CONTESTED JUSTICE ILLICIT SEX AND INFANTICIDE IN THE REPUBLIC OF VENICE, 1557-1789

This captivating history exposes a clandestine world of family and community secrets--incest, abortion, and infanticide--in the early modern Venetian republic.

With the keen eye of a detective, Joanne M. Ferraro follows the clues in individual cases from the criminal archives of Venice and reconstructs each one as the courts would have done according to the legal theory of the day. Lawmakers relied heavily on the depositions of family members, neighbors, and others in the community to establish the veracity of the victims' claims. Ferraro recounts this often colorful testimony, giving voice to the field workers, spinners, grocers, servants, concubines, midwives, physicians, and apothecaries who gave their evidence to the courts, sometimes shaping the outcomes of the investigations.

Nefarious Crimes, Contested Justice also traces shifting attitudes toward illegitimacy and paternity from the late sixteenth through the eighteenth centuries. Both the Catholic Church and the Republic of Venice tried to enforce moral discipline and regulate sex and reproduction. Unmarried pregnant women were increasingly stigmatized for engaging in sex. Their claims for damages because of seduction or rape were largely unproven, and the priests and laymen they were involved with were often acquitted of any wrongdoing. The lack of institutional support for single motherhood and the exculpation of fathers frequently led to abortion, infant abandonment, or infant death.

In uncovering these hidden sex crimes, Ferraro exposes the further abuse of women by both the men who perpetrated these illegal acts and the courts that prosecuted them.

NEFARIOUS CRIMES, CONTESTED JUSTICE ILLICIT SEX AND INFANTICIDE IN THE REPUBLIC OF VENICE, 1557-1789