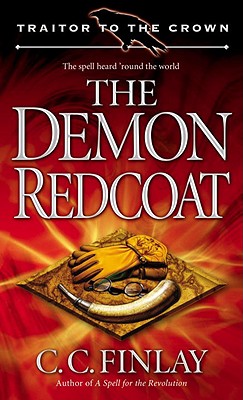 DEMON REDCOAT, THE TRAITOR TO THE CROWN

The War of Independence appears to have no end in sight. Discouraged by the bloodshed and suffering their magic can do nothing to prevent, Proctor and his wife, Deborah, dream of starting a family. But when Deborah gives birth, a powerful demon called Balfri, summoned by the secret society of European witches known as the Covenant, tries to possess the child. Though the attack in unsuccessful, it makes Proctor and Deborah realize that there can be no safety for them, or for anyone, until the Covenant is destroyed.
With the help of such patriots as Benjamin Franklin and John Adams, Proctor embarks on a desperate journey to take the fight to the heart of the Covenant's power: Europe. There he will uncover a dark, necromantic design of chillingly vast proportions. Meanwhile, back in America, Deborah will face Balfri again-only this time the demon will have the whole British army to command.

Title: DEMON REDCOAT, THE TRAITOR TO THE CROWN

Keywords: MMPB, FAIR, WORN, AS IS,

DEMON REDCOAT, THE TRAITOR TO THE CROWN