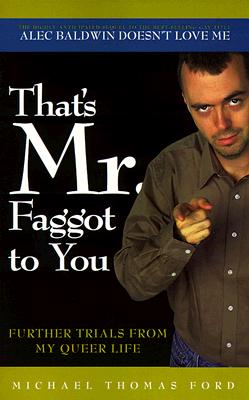 THAT'S MR. FAGGOT TO YOU : FURTHER TRIALS FROM MY QUEER LIFE

Summer is here, and I should be in shape. I even promised myself that this year I'd go to the gym and just do it. But once again I'm not ready. My stomach is still too big, my shoulders too small. Blame it on Wally Shufelt.

Wally Shufelt--Mr. Shufelt--was my fifth grade gym teacher. One of those aging ex-jocks who failed to make it to the majors, he told us at least once a month how the Dodgers almost signed him right out of high school but a knee accident sidelined him before the start of spring training. Instead, he spent his years taking out his frustrations on the boys he used to be, dedicating his life to making men of us. And he took to it with a fervor generally found only in missionaries and defenders of the spotted owl.

I think for most gay men gym class was a black or white thing. For those of us who could actually do things like tackle, hit balls, and sink free throws, it was a junior version of nirvana, complete with sweaty bodies and blossoming hormones. For those of us completely bereft of any coordination whatsoever, it was a different story altogether.

Today I can enjoy physical activity--I have even been known to watch sporting events from time to time--but back in my school days I was decidedly in the second camp. Although my father had been the star athlete at the same school 25 years earlier, I inherited none of his talent. And in a backwoods school where excelling in academics was nothing compared to being able to score 42 points in the first half of whatever game one was playing, this was a decided disadvantage.

How I dreaded those alternating days when fourth period came and I had to enter that cavernous, wooden-floored palace of misery with its stench of varnish and unwashed adolescence. Many were the mornings when I would wait for the bus and pray as hard as I could for God to bring about the Second Coming before 11:00 rolled around and I was forced to see what new ordeal Mr. Shufelt had prepared especially for me.

You see, although we engaged in the usual seasonal gym class cycle of soccer-basketball-baseball, Mr. Shufelt was happiest when putting us through the paces of some activity of his own design. He was of the firm opinio

Title: THAT'S MR. FAGGOT TO YOU : FURTHER TRIALS FROM MY QUEER LIFE

THAT'S MR. FAGGOT TO YOU : FURTHER TRIALS FROM MY QUEER LIFE