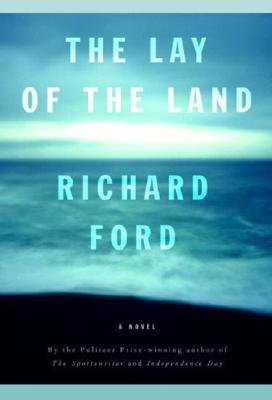 LAY OF THE LAND, THE

With "The Sportswriter, " in 1986, Richard Ford commenced a cycle of novels that ten years later--after "Independence Day "won both the Pulitzer Prize and the PEN/Faulkner Award--was hailed by "The Times "of London as "an extraordinary epic that] is nothing less than the story of the twentieth century itself." Now, a decade later, Frank Bascombe returns, with a new lease on life (and real estate), more acutely in thrall to life's endless complexities than ever before.
His story resumes in the autumn of 2000, when his trade as a realtor on the Jersey Shore is thriving, permitting him to revel in the acceptance of "that long, stretching-out time when my dreams would have mystery like any ordinary person's; when whatever I do or say, who I marry, how my kids turn out, becomes what the world--if it makes note at all--knows of me, how I'm seen, understood, even how I think of myself before whatever there is that's wild and unassuagable rises and cheerlessly hauls me off to oblivion." But as a Presidential election hangs in the balance, and a postnuclear-family Thanksgiving looms before him along with crises both marital and medical, Frank discovers that what he terms the Permanent Period is fraught with unforeseen perils: "All the ways that life feels like life at age fifty-five were strewn around me like poppies."
A holiday, and a novel, no reader will ever forget--at once hilarious, harrowing, surprising, and profound. "The Lay of the Land" is astonishing in its own right and a magnificent expansion of one of the most celebrated chronicles of our time.

Title: LAY OF THE LAND, THE

LAY OF THE LAND, THE