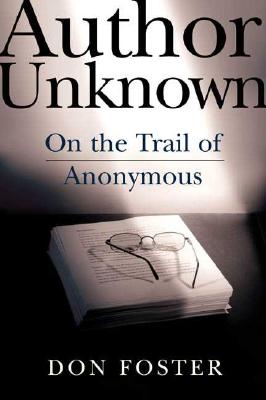 AUTHOR UNKNOWN ON THE TRAIL OF ANONYMOUS

C2000 HARDCOVER IN DUST JACKET [FOSTER, DON] ON THE TRAIL OF ANONYMOUS

From the professor who invented literary forensics--and fingered Joe Klein as the author of "Primary Colors"--comes the inside story of how he solves his most challenging cases
Don Foster is the world's first literary detective. Realizing that everyone's use of language is as distinctive as his or her DNA, Foster developed a revolutionary methodology for identifying the writer behind almost any anonymous document. Now, in this enthralling book, he explains his techniques and invites readers to sit by his side as he searches a mysterious text for the clues that whisper the author's name.
Foster's unique skills first came to light when a front-page "New York Times" article announced his discovery that a previously unattributed poem was written by Shakespeare. A few weeks later, Foster solved the mystery that had obsessed America for months when he identified Joe Klein as the author of "Primary Colors." Foster also took on a case involving the elusive Thomas Pynchon. And his contributions to the Unabomber and JonBenet Ramsey cases have led the FBI and several police forces to hire him to train their organizations.
Introducing a fascinating new field of forensics, "Author Unknown" will appeal to mystery fans-and to everyone interested in words and the writer's craft.

Title: AUTHOR UNKNOWN ON THE TRAIL OF ANONYMOUS

AUTHOR UNKNOWN ON THE TRAIL OF ANONYMOUS